After running a Tough Mudder, three half marathons and various 10ks in the past five weeks, my body seems to have relented and stopped nagging me with pain over the Achilles Tendinitis I have been suffering from. As the day of the Loch Ness Marathon finally arrived, I couldn't be happier to have hope that I may be able to run it without suffering excruciating pain with every step.

My knowledge of medical science has always been quite limited to say the least. In fact it is very much like The Numskulls who used to appear in the Beano comic. Little people who live inside the body and operate it with levers. They do their best to look after it and limit the damage despite all the gruelling punishment my mind has in store. Although they don't always get their way, I know they try and I usually appreciate that. However, the Numskull who had been poking the inside of my ankle with sharp needles every step I ran had finally relented and sodded off to do something more rewarding. The relief was incredible. 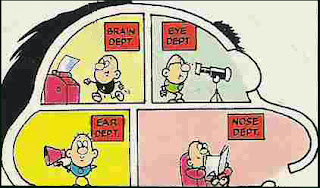 As usual the logistics were difficult. We left it a bit late to book family accommodation in Inverness, so opted for a room in the Premier Inn in Elgin. This meant having to add a 45 minute drive to Inverness onto an already early start. The marathon bus departed Inverness at 7:30. So after spending an almost sleepless night in a hotel room which my children had already began to transform into a scene from Fear and Loathing in Las Vegas, I awoke to a lukewarm shower and to find the cream scone I had been saving had already been eaten by a hungry little mouth. This was devastating as the hotel didn't start serving breakfast until 7am. Not the best start to the day.

After arriving at Brught Park and parking the car, I made my way to the coach pickup point, joined the endless toilet queue and popped an Ibuprofen. I generally don't take pain killers at all, usually believing that pain is there for a reason, but as I was about to run 26.2 miles fearing that my Achilles pain could return with a vengeance at any moment and that the tendon might even snap, I felt I had little choice.

I grabbed a seat at the back of a coach and was soon joined by a couple of guys who struck up conversation about my Tough Mudder t-shirt. They had completed it too. (This became a bit of a theme for the day, in fact it seems everyone I spoke to was a Mudder.) Loch Ness was their first marathon and they were excited about doing it in around 3:30. Having planned to do my first marathon in sub 4 hours in 2009 and failing dramatically, I recalled that feeling all too well. I'm planning on telling that tale one day if anyone is interested in hearing it.

Soon after arriving at the start, somewhere North East of Fort Augustus on the South side of the Loch, I was interviewed by a German journalist for Runner's World magazine. He asked me everything from what I tell my children about the Loch Ness monster through to what motivational quotes go through my head when I usually hit my own personal wall around mile 18. Without thinking, I told him "Winston Churchill - If you're going through hell, keep going!" Not so sure my interview will be published after that faux pas.

I was expecting to have to run a good few miles for the endorphins to kick in and ease any remaining pain in my heel, but was surprised to find that the first mile was painless, in fact I am writing this two days later and although I'm still struggling to walk I have no Achilles pain. The first six miles of Loch Ness are a gradual descent and passed easily. I'd created a feel good playlist specifically for this race and the miles I covered reached double figures pretty quickly and with relative ease. Miles 10 to 17 are undulating but not too troublesome, but having ran this race back in 2011 I knew what was coming when I reached Dores at mile 18. A two mile hill climb! 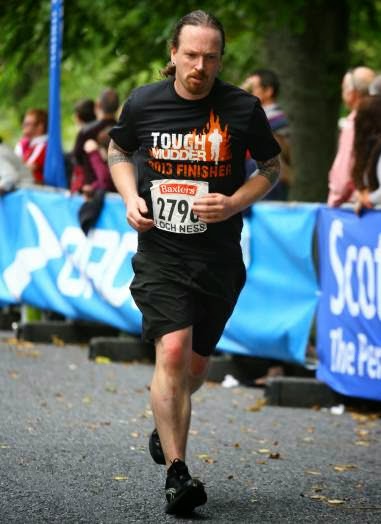 As well as hydrating at every water station along the route, I'd also filled my pockets with various jellies and gels I had been handed. Whilst I had eaten some nice ones earlier in the race, I made the mistake of eating a couple of chocolate gels at the bottom of the hill. They were absolutely disgusting and made me want to vomit. The sickly chocolate mixed with phlegm to create a disgusting brown mucus that I spent the next few miles coughing back up. Once over the hill around mile 23, I met one of the first time marathoners I had met on the bus. He had crashed at mile 20 and started to walk. I ran-walked with him for a couple of miles before we reached the final leg.

At mile 25 my stomach started to cramp badly due to the energy gels and jellies I had been guzzling along the route. I'd never used these before and am not sure if I will again! (At least not in that quantity or chocolate flavoured). I had reduced my pace to a fast walk when a fellow runner came up behind me and put his arm on my shoulder to offer encouragement. When you're going through pain together, sometimes the realisation that a fellow runner understands and cares enough to put their hand out to you is enough to get you up and running again. 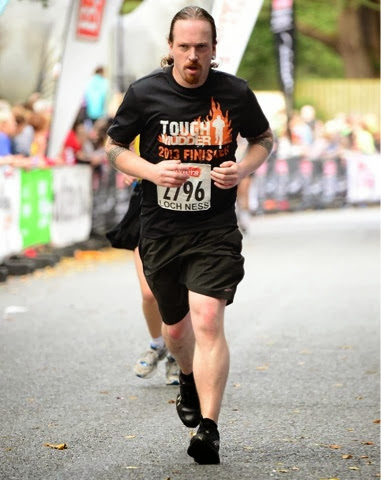 Whoever designed the last mile of this race must have been a great admirer of the Marquis de Sade. Whilst there is a perfectly good footbridge which takes you straight across to Brught Park, you are forced to run past this (for what at this point seems like eternity), over the main road bridge, doubling back on yourself across the river down to the finish. One of my work colleagues, Sharon, was waiting at the beginning of mile 26 to cheer on her husband who was also enduring the same hell as me. A cheer from her inspired me to pick up pace and keep going. At this point, a fellow runner also commented that he had seen me at every race he had done this year. Seems I'm running every other race he has planned too. The thought that I hadn't missed any raised my spirits.

As I approached the finish, I put on a sprint and completed the marathon in a chip time of 04:09:19 (almost vomiting as I crossed the line). I picked up my medal, t-shirt and goodie bag. My partner (and running widow) Clare, was waiting there to greet me with my children and as usual my daughter took great pride in wearing my medal. It's moments like this that make all the torment so worthwhile. 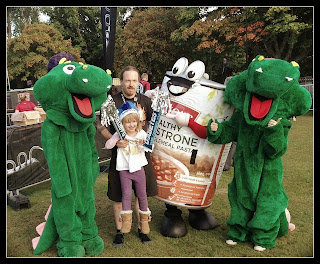 We spent the following day in recovery mode, eating cake and drinking coffee whilst wandering around the Findhorn Foundation. One of the things I love about running these races is getting out and seeing places I would never normally have any other reason or excuse to visit. 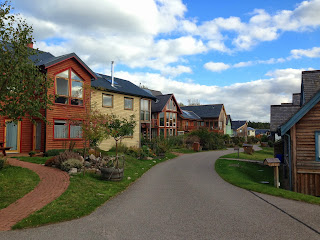