The Fraserburgh Half Marathon (also known as the "Broch" Half) is the last half marathon of the year in the Scottish running calendar. Although Fraserburgh is about 122 miles from the village in which I reside, the thought of going cold turkey until the next Scottish half in February was far too much for me to bare. So much so, that the dreadful prospect of hauling myself out of a warm bed to face a five and a half hour return drive just so that I could put myself through another two hours of hell didn't even make me DNS. All this and I didn't even know if there would be a medal at the end of it.

The only thing I did know about Fraserburgh was from some background reading from my days studying abnormal psychology at uni, that being that it was the birthplace of infamous serial killer Dennis Nilsen. A horrific legacy for any self respecting town to bare. With this thought in mind I stumbled out into the 7:00am winter darkness, clambered into my car and set off for an epic speed camera riddled journey up the A90 to the far northeast corner of Aberdeenshire

Registration for this race was held between 9:30 and 10:30am, so about a dozen Gatso speed cameras later and a worn down set of break pads, I arrived at the James Ramsay Park Pavilion. After collecting my number and freebie technical t-shirt, I found myself a space outside the pavilion, doubled up my t-shirts and began psyching myself up with some loud music. 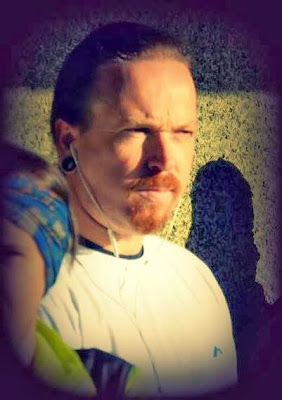 The first mile leaves James Ramsay Park and continues round a circuit of a housing scheme before heading out into countryside, turning into Philorth Woods and then a loop on country roads and trail paths before a stretch on a disused railway line. The course is fairly undulating but has no real hills worth mentioning.


At around mile seven I got chatting to Peter, a friendly Perth Road Runner from Blairgowrie who tried to persuade me to join up. I ran alongside him  for a couple of miles, chatting about all the races we had each done this year, until the path became too narrow at which point he broke away and I carried on at my own pace.

On approaching the finish line I looked around and was disappointed not see any of the other finishers wearing a medal. So it was a pleasant surprise to be handed a medal (still wrapped in cellophane) along with my goodie bag on completion of the race. There's only one thing better than being given your finishers medal at the end of a race and that is being given one when you didn't expect it. 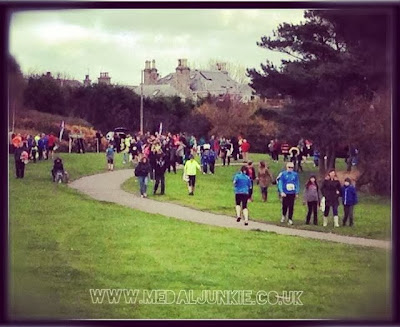 Something I love about long distance running is the amount of guilt free food you can consume after a race! Running at an average pace of 8:29 per mile, I calculated that I burned 1727 calories, so I had no qualms about stuffing my face at the very generous post-race spread. This included a fantastic array of home baking, soup, cakes, sandwiches etc.. 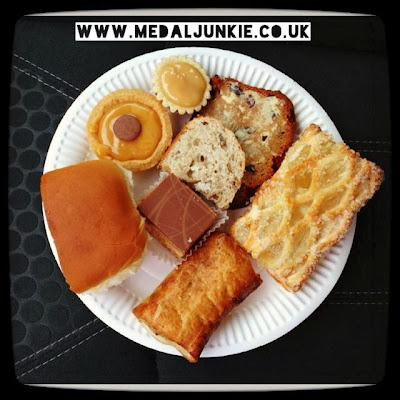 After the race I went for a drive around Fraserburgh to check out some of the sites. I wouldn't go as far as calling myself a pharologist, but I've always held an interest in lighthouses, to the extent that I once applied for a job with the Northern Lighthouse Board. The "Harbour Lighthouse" in the photo below is a fine example. Fraserburgh is also home to The Museum of Scottish Lighthouses, but unfortunately I just assumed this would be closed on a Sunday during the winter months and never  thought to pay it a visit. Sadly I was mistaken, so it's a definite on my list for next year. I'm beginning to sound like some kind of lighthouse nerd. 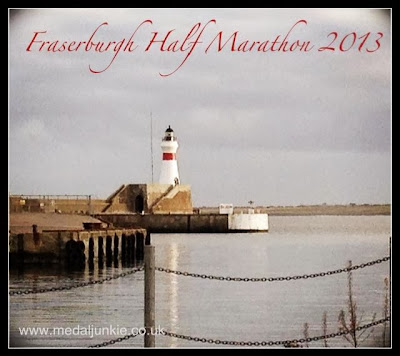 Posted by Medal Junkie at 10:38 No comments: