The keen eyed reader may notice that the usual medal photo in this race report contains not one, but two pieces of bling! If you carry on reading I'll explain why.

I'm aware that I haven't been very good at keeping my running blog up to date, there is however a reason for that. I have been out running LOTS! As of writing this I have completed 74 races so far in 2014. Combine that with a family, a full-time job and all the other demands and pressures that go with being an irresponsible adult in the 21st century and it really doesn't leave me much time for blogging. However this post is quite a significant one, so although it's taken several months to get around to it, I always knew that I would write it up eventually.

The reason I started blogging about races was not to give a technically accurate report of each course, detail my splits, talk about nutrition or discuss the physiology of running. There are plenty of other blogs that do those things much better than I ever could. (I don't even own a watch never mind a Garmin!) One of the main reasons I write about the races I run, is to document this stage in my life to my young children. So that one day they can look back and say this is what my dad did and this is how he felt and what he thought whilst doing it. So if the future Sophie and Jack are reading this, I'll start by saying I love you both very much and please continue reading to discover an important chapter in your family history as you would probably be too young to remember it. Especially little Jack. 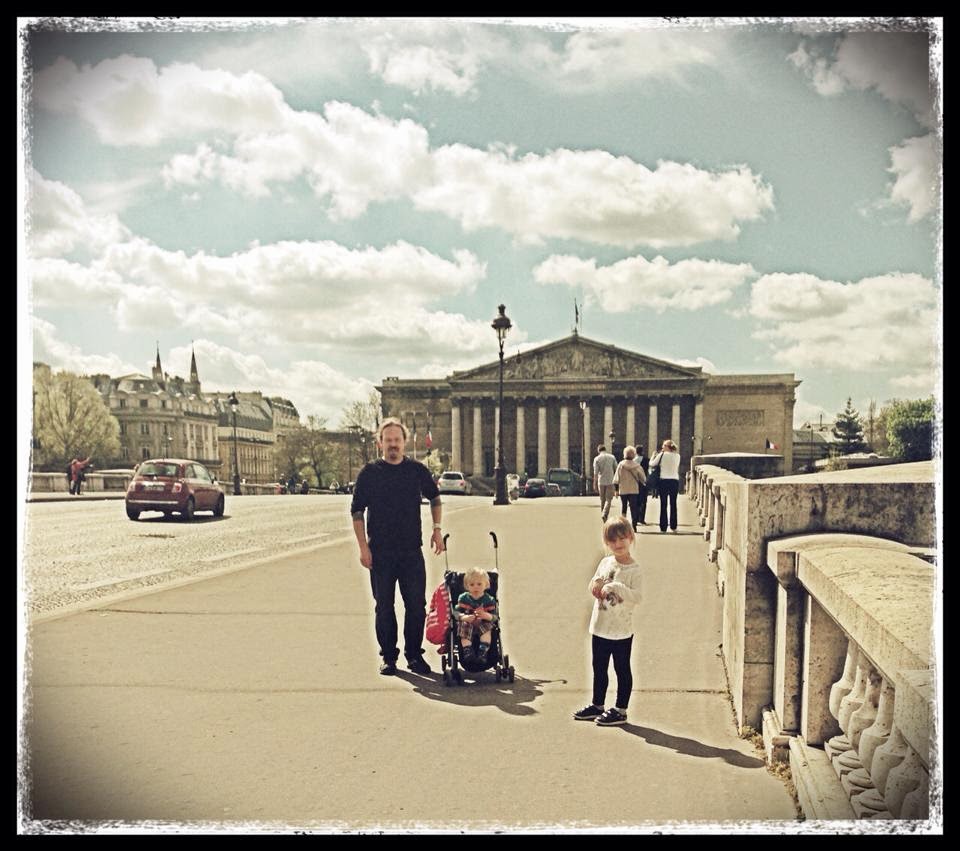 After receiving a rejection letter from the 2014 Virgin London Marathon ballot, I decided to cheer myself and my family up by booking a short five day city break in Paris, which, ahem.. coincidentally happened to include the 6th April. What was significant about this date you may ask? It was the date of the 38th Marathon de Paris. Exactly one week before the London marathon. Running however, wasn't the only plan I had in mind. Clare and I have been a couple for two whole decades and although we've often talked about it we still haven't tied the knot. So what better place to propose than the most romantic city in the world.

We hadn't been to Paris in about nine years and that was way before we had children, so we didn't really know what to expect. It was both Sophie and Jack's first flight and much to our relief they took to it very well. Meanwhile, I had my own concerns on how I would get the ring and it's box through customs without arousing any suspicion from Clare. Thankfully everything went to plan; the children were angelic on the plane, the ring went through the x-ray scanner undetected by Clare and we caught an adjoining train and metro to the hotel without a hitch! (Excuse the pun.)

We'd booked a four night stay in a Novotel in Bercy, in the East of Paris. This was very convenient for us as a family, as it was situated in a pleasant suburban area but had a metro station only 200m from the hotel.

The next day we attended the Marathon Expo, where as a compulsory part of the registration process I handed over a signed medical certificate from my doctor to say that in his opinion I was healthy enough to run a marathon. Thankfully he seemed to have more faith in my current ability than I did. Afterwards, I collected my running number and goodie bag and we all had a wander around the Expo looking at all the fascinating but very expensive innovations available to the modern runner.

The rest of the day was spent visiting some Parisian landmarks, followed by a stroll along the Seine and a picnic in the Champ de Mars. It was there, in the shadow of the Eiffel Tower, that I proposed to Clare and she accepted. Clare, Sophie and I were all over-joyed, Jack was just happy that he was getting to play with his ball in a park. That evening we all went out for a nice meal, at which I ate everything you shouldn't eat before running a marathon the next day and nothing you should. C'est la vie!

We'd agreed that Clare and the children should stay away from the marathon on race day. With 46,000 runners and many more spectators lining the streets, it would be a much safer (and less boring) option for the children. Besides the event of them actually glimpsing me running was very slim, especially as the finishers' area is securely cordoned off with large steel fences.

After an early start and a cooked breakfast, dressed in my running gear including a Union Jack vest I had been gifted for the occasion, I caught the Metro from Bercy to the Avenue des Champs-Élysées. I found the pen for my expected finish time and joined the tens of thousands of runners waiting for the 08:45am start. It was interesting to see so many different nationalities listed on all the running bibs.


The atmosphere was electric. A huge cry went up when the first wave set off and after I fought past mountains of discarded clothing, it didn't seem long until it was my turn to join them. With only a few seconds to go, a guy beside me tightened his running belt with too much force, which caused about half a dozen gels to explode on myself and several other people in close proximity. My hands, arms and part of my face were covered in a thick lemon flavored goo. What a great way to start a marathon, especially on what was promising to be such a hot day. Before we had time to lynch him or even pass a menacing stare or growl, we were off running down the Champs-Élysées.

As I ran, I used the water from the first water station to wash off as much of the citrus gel as I could before it got too sticky. The start of the race sets off downhill, circles around Paris' largest square, the Place de la Concorde, before turning right onto the Rue de Rivoli. The route then takes you past the Louvre, round the Place de la Bastille and then down the Boulevard Soult to the largest public park in the city, the Bois de Vincennes. After a loop around the park you head back toward the centre of Paris, reaching the halfway mark at the Rue de Charenton. I remember the cheering crowds at this point, lining the tightly packed streets. They provided much needed encouragement to keep me soldiering on in the morning heat. From here, the course then follows the Seine, passing under the oldest remaining bridge across the river, the Pont Neuf, then through a series of tunnels.

The live music around the course was a fantastic idea. There were apparently a total of ninety different live bands and orchestras playing along the route; everything from jazz and rock through to traditional West Indian music. I seem to remember even passing an oompah band at one point. At mile 17 the course takes you through the longest car tunnel in Paris which had been turned into a full on rave with pumping techno, glitter balls and disco lighting. It was an amazing yet highly surreal experience. Even stranger, I found out sometime later that this was the very same tunnel in which Diana, Princess of Wales had tragically lost her life.

I was running quite strongly until around mile twenty-one when I got caught behind a pack of runners who had stopped for oranges at a water station in Bois de Boulogne park, this broke my stride and caused me to have to slow to a walking pace for a few hundred metres. I struggled to get started again, but with encouragement from the crowd and shouts of "Allez Daniel!" (after some eagle eyed spectators read the name on my bib), I set off on the final 5 miles of the course. I remember the last cobbled section on Avenue Foch being particularly painful on my ankles. For the final mile, I seemed to be running behind some French celebrity who was getting some major applause from the crowd. I never did find out who he was. After crossing the finish line I was handed my medal, which is a very impressive heavy, gold coloured "ribbon". I picked up my finishers t-shirt and limped off to the metro, eager to get back to the hotel to see my family.


After congratulations from Clare and the kids, a well needed shower, a couple of really strong French beers and a nap I began to feel almost human again, so we all headed out for dinner.


Our final full day was spent chilling out at the Louvre and checking out some interesting antique and curiosity shops off the beaten track.


On the flight home we met a group of ladies from Edinburgh, who were still on a high after completing the marathon. They struck up conversation with Clare about how well behaved Sophie and Jack were on the plane. When Clare explained how many races I was doing this year, one of them remarked that it was not me, but Clare, who deserved a medal for being so understanding. I couldn't agree more.

Posted by Medal Junkie at 11:00 No comments: