Running races isn't only about the medals for me, it's sometimes also about bibs, t-shirts, headbands, snow globes and other assorted resin coated gubbins too, but usually it's just about completing the races themselves, increasing my level of fitness and getting out to places that I have no other excuse to visit.

I stumbled across the Lumphanan Detox 10K on Google a few weeks prior to the event. I'd never heard of Lumphanan and presumed by its name that it would be in Wales, so was pleasantly surprised to discover that it was nestled away in the heart of Aberdeenshire. Although still a bit of a trek for me, I was looking for some races in early January to keep my momentum going, so although I was aware that there was no medal at the end and knew I'd regret it on the day, (when I was sure to wake up with a three day hangover), I signed up. It's Scotland's first 10K event of the year, it would have been rude not to!

Having ran the 30th Blairgowrie Ne'er's Day Fun Run (a 3.7 mile road race) the day previously, this was my second race of 2014. The race started at 11:30am, so I clambered out of bed at 8:00am, had a quick shower, got dressed and made myself a roast beef roll (still using up left-overs from New Year's Day). I'd cut short my continued celebrations by early evening the night before, knowing that I had an early start and a long drive ahead, not to mention a race to run, so felt relatively good. An app on my phone plotted the shortest route to Lumphanan, this being over Glen Shee and then passing through Braemar, Ballater and Aboyne.

I always enjoy the roller-coaster ride of a drive over Glen Shee and the scenery is pretty spectacular too.

Apart from a few cars making their way to the Glenshee Ski Centre, the roads were almost deserted at that time in the morning. I imagine even more so due to it being the 2nd of January. 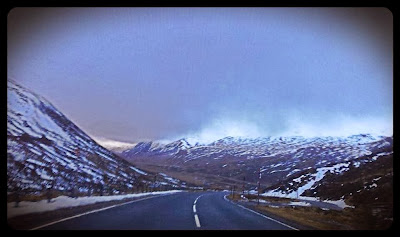 I arrived in Lumphanan about 45 minutes before the start of the race, soon found the race car park (a small patch of muddy farm land behind some derelict buildings) and was ushered into it by one of the helpful marshals. After parking the car I made my way to the village hall to register and collect my race number and t-shirt. I also mistakenly used the Lumphanan public convenience, whilst not quite as bad as the toilet from Trainspotting, it was pretty grim and came complete with damp toilet roll. At least I hope it was just the damp that had gotten to it.

This race definitely isn't one for a PB. There are a number of reasons for this, one of these being that the first two kilometers are all up hill. A treacherous horrible hill. I consoled myself with the knowledge that it would soon be out of the way and that there was a lot of down hill to follow. It was tough though, especially after all of my Christmas/New Year over-indulgence and I found myself puffing and panting toward the top, but was determined to run it all. I took inspiration from a few firefighters who were also tackling the hill (whilst dressed in full fireman's overall's. helmets and oxygen tanks), and was very relieved when I passed the two kilometer marker at the top.

The third kilometer was mostly downhill and passed quickly. Sadly, around about this point I heard a lot of screaming over the top of my MP3 player. On turning around I noticed that a car had come to a sudden halt about 50 yards back around a corner. A crowd of runners had gathered around and I instantly thought the worst, that someone had been knocked down. Word quickly came down the line that it was a runner's dog that had been hit by the car. I gather the driver had misjudged the corner at speed and careered into it. Although there were plenty of luminous "Caution Runner" warning signs and marshals around so why he was traveling at such a speed beats me.

Saddened by this, but also realising there was nothing I could do to help with the situation, (as I didn't even have my phone with me) I carried on. For the next three kilometers we continued on road , passing a water station at the 5K mark, before we switched terrain to a very muddy farm track for the next two. It was exceptionally muddy to the extent that in some places I almost lost my shoes to the suction.


It was a relief to get back onto road for the final two kilometers. The last kilometer was deceptive, when I reached the Lumphanan village hall, I assumed the finish line must be in sight, only to find I still had to do a lap of the block. On approaching the home straight it was a nice touch to see and hear a piper piping the runners home. I mustered a strong sprint finish on the grass completing the race in 00:53:08  After collecting a cup of hot soup I headed back to the car for the long drive home.

Although this race comes at a difficult time of year I strongly recommend it, but intend to be better prepared for the first 2K if I run it again next year. Oh.. and I found out on Facebook later that the dog managed to stand after it was hit by the car and was driven off to the vets straight away. Let's hope it was OK.

Posted by Medal Junkie at 09:19 No comments: