This year I promised myself (and my family) that I would be (slightly) more selective with the races I enter and that I wouldn't sign-up for races that I have previously completed, just for the sake of it. The exception to this being, routes that I've really enjoyed and races that I have unfinished business with. The Forfar Multi-Terrain Half Marathon fitted into both of these categories. Although, being a multi-terrain event and not an ordinary half marathon, I hadn't felt my best on the day last year and ran a personal worst (at the time) of 02:02:34 for the 13.1 mile distance. I even had to walk up some of the steep hill section. This year I was determined to improve on my time and resolute that there would be no walking!
Impeccably organised by the Forfar Road Runners, this event is the first half marathon in the Scottish running calender and sells out very quickly. Like an increasing number of races these days, in order to secure a place, you have to be very quick off the mark. I was poised by my keyboard fifteen minutes before it opened, refreshing Entry Central DoS attack style and was relieved to secure place 33 out of the 250 available.
As the name suggests, this race covers a multitude of different terrains, including bog, farm track, fields, ice, muddy paths, pavement, tarmac and usually has a knee\thigh deep "water feature". Unfortunately, this year the course had to be re-routed to avoid the water section due to health and safety concerns. It is stated in the course description that this is not a race for novice runners and that all entrants should either study the map in advance or carry one with them, but with all the signage, marshalls and checkpoints I think getting lost would be quite a challenge in itself.
Registration opened at 9am in Strathmore Rugby Club's club house with the race kicking off from a nearby playing field at a 11am. I arrived just after ten and after a short wait to get a space from the limited parking available, I met up with Peter, Murray and Bob. It was Bob's 71st birthday and his partner Margaret had also come along to spectate. After a brief chat I headed off to register and then pinned my race number to my shorts in case I decided to remove my jacket during the race.
With the 11am start approaching, we all began to assemble on the nearby rugby pitch at the loch side. Since Forfar was the birth place of Bon Scott, I thought it only fitting to have a blast of Highway to Hell to help motivate me through the first few miles. After a brief countdown we were off, running the first section around the loch. The ground here was pretty firm and made for easy going. For the first couple of miles I kept pace with both Bob and Murray, covering mile one in 7:55 and mile two in 7:50 (my fastest mile of the race). For mile three the course turns uphill onto tarmac, before heading back down a rough farm track to join the Kirriemuir Road.
I'd taken my phone with me to snap some pictures whilst running and was surprised at how clear they turned out. A couple of months previous to this, whilst out on a very wet, sixteen mile training run, I almost managed to kill my iPhone with water damage. Water had leaked into my jacket pocket and saturated the phone. Thankfully, although still an unnecessary hassle and expense,  I managed to revive it by stripping it down, drying it out, then flushing the mineral deposits from the circuit boards using Isopropyl alcohol and then replacing the screen. It was a tense few days! After that incident I don't take any chances and now carry my phone in a zip-lock waterproof freezer bag inside my jacket pocket whilst running.
After arriving at checkpoint one and balancing on one leg, whilst waiting for the marshal to clip my race number, I began to regret attaching it to my shorts. However, I was soon able to head on my way down the road, turning onto a very potholed farm track for mile four. The ice had been broken on most of the large puddles leaving a very rough surface to run on. Some of these I managed to jump, others I just ran through, but a few forced me up onto the verge, which was quite a hazard in itself.
Around mile six the course changed to a comforting trail section which provided much needed relief to my poor knees. 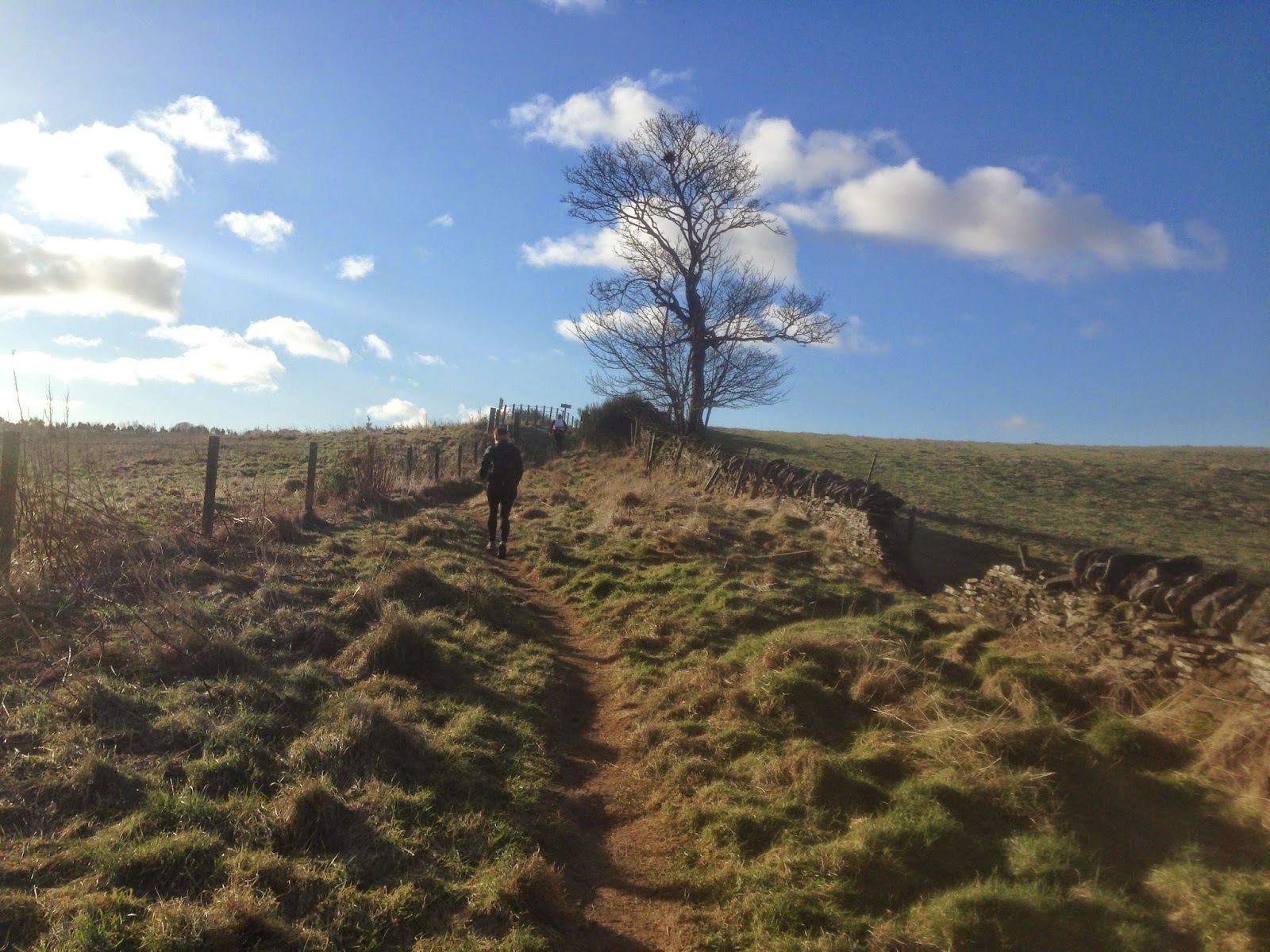 After a couple of miles of trail running, passing landfill and quarry sites,  I was again spat back out onto the road. One mile further on and another checkpoint later, I arrived at the foot of the hill. This hill is very deceiving. Just as you think you've arrived at the summit, you take a right turn and realise the climb has only just begun. I passed quite a few people who had chosen to walk at this point, but was pleased to make it to the top, without having to do so myself.
Once I reached the summit I couldn't resist taking out my phone and snapping a few pictures of the scenery and view over Forfar, whilst I ran.
From this point the route is mainly downhill or relatively flat, but there are still many trip hazards as you run down from Balmashanner Hill.
Arriving at the bottom of the hill, my race number was clipped by another friendly marshall, I then headed along a short section of the Dundee Road, before turning down another farm track. From here the route passes the farm and descends another steepish icey track, then along the side of the farmer's field. Last year the field was much harder going as it had just been ploughed, this year the farmer (or season) seemed to be ahead of itself and the crop had already began to sprout 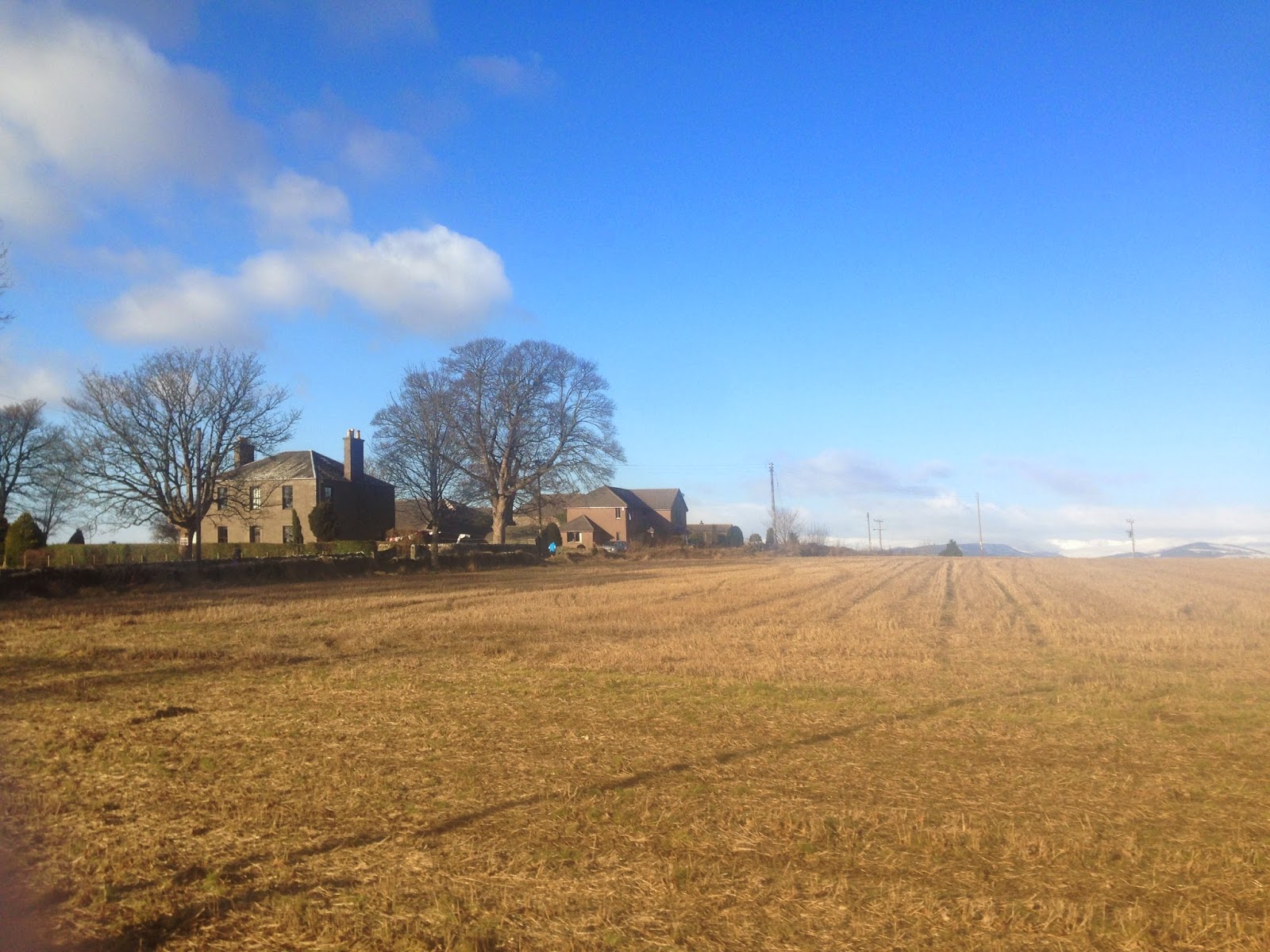 After crossing the field, it wasn't long before I arrived at the next checkpoint on Glamis Road. Across the road lies the industrial estate and from there I knew it was only a short run along the lochside trail before I would be finished. With only about fifty metres to go, I mustered up a sprint and managed to pick off a couple of runners I had been keeping pace with for several miles. (I'm only ever competitive in races when I have the finish in my sights.)
After crossing the finish line, I met up with Bob and Margaret and headed back inside the rugby club to enjoy some of Forfar Road Runners excellent post race hospitality. There were several different soups to choose from, tea and coffee and a wide selection of sandwiches, cakes etc. The bar was also open from 12:30pm, although I couldn't enjoy a post-race pint this year due to Scotland's newly imposed drink drive limit. I stayed around to watch the prize giving in which Bob received the veteran over 70's prize with his fantastic time of 1:47:18, putting many of us younger men to shame.
My only complaint with this race is the lack of medal or memento for finishers. I appreciate that it is only £7 entry fee for Scottish Athletics affiliated runners (£9 for non-affiliates), but I'd be more than happy to pay a few extra pounds if a medal, buff or some other commemorative item was included in the price.
Posted by Medal Junkie at 11:00